Michael F. Simon Builders: Over a Century in the Making

In 1893, Michael Simon began constructing farm buildings for a dollar a day. By the turn of the century, he had diversified into the development and construction of residential and commercial projects in the Waunakee area. Some of his commercial buildings and homes remain in use today.

Michael formed a partnership with his youngest son, Michael F., in 1937 called M. Simon and Son. The two went on to partner in the building of many fine homes. During the devastating depression, they did small carpentry repair and maintenance jobs. Michael F. also worked in carpentry for a couple years at the Badger Ammunition Plant.

IIn 1952, Michael, the elder, retired and Michael F. took over the business. He incorporated in 1967 under the name of Michael F. Simon Builders, Inc., which has remained the permanent. Michael F. went on to do considerable land development in Deforest, Westport, and Waunakee, along with the construction of many high quality homes. He believed strongly in training and establishing his own trade crews to require and control top quality procedures. 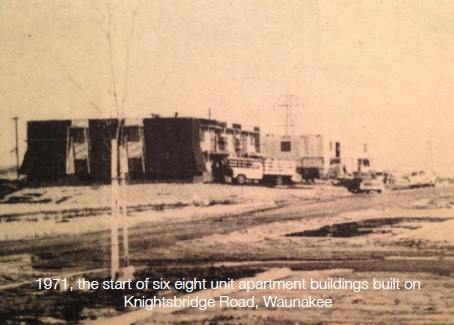 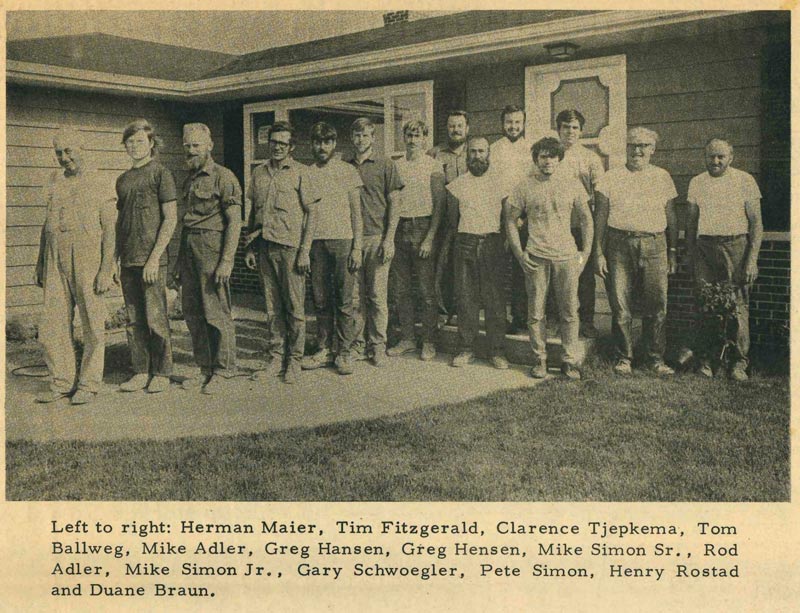 After holding the management position since 1967, Michael P., oldest son of Michael F., became president of the corporation in 1973. Michael P. continued with farm purchases and, eventually, residential development of hundreds of building sites in Waunakee and Dane County. An in-house sales staff was set up, along with new in-house interior and architectural design services.

In 1971, the company developed and built the first-of-its-kind multifamily housing project in Waunakee, followed by light commercial projects of an expanded nature from those of the original founder. Having spent several years running the framing crews, Michael F. retired in 1980.

With its new design-build services, the corporation moved into the upper-end residential market to supplement its mid-range product, and the company’s name remained synonymous with top-of-the-line residential construction. In 1978, new offices were built at 817 S. Division Street, Waunakee. The offices provided space for sales and design staff, along with product sample viewing displays, which were unique at the time. The company used “Builders, Designers, Developers” as its everyday slogan to supplement its team concept of company unity, modeled after winning sports teams. 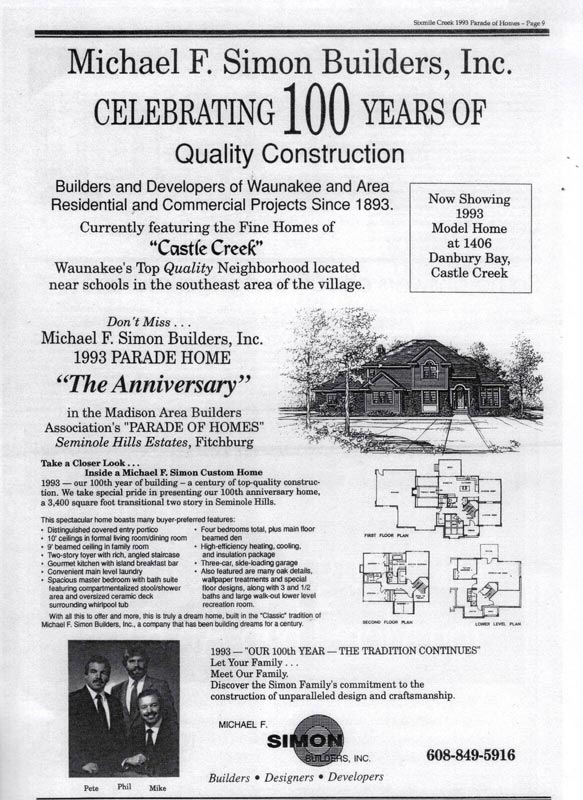 A Century of Simons

In 1997, Michael P. Simon turned the company over to his two younger brothers, Peter and Philip Simon. Philip, the long-time estimator and manager of the commercial construction division and third generation builder, became President, with the charge to lead the company into the twenty-first century. Phil led the company for 21 years, was a Certified Graduate Builder, and lead the company through countless successful high-end new homes, remodeling projects, commercial construction, and land development in and around the Waunakee and Dane county area. Phil was an active and continuous member of Madison Area Builders Association, a past President and Builder of the Year, Life Director for the Wisconsin Builders Association and Certified Graduate Builder of the National Association of Home Builders. He strongly believed in giving back to the community and was a founding member and Past President of the Waunakee Community Foundation.

Peter, was in charge of company drafting and design services in the early seventies until a full-time design staff was implemented in the late seventies and he was also the team leader of the finishing crew during this time. Peter remained in charge of finishing crews and the follow-up service division as he had done for over thirty years until his retirement in 2003.

Phil’s son, Paul Simon joined the team in 2009 as the estimator and vice president, and fourth generation of Simons involved with the business. Phil and Paul worked together over the years to continue the high standards that the company is known for until Phil’s retirement in 2020.

Paul is a member of Madison Area Builders Association and the National Association of Remodeling Industry. He maintains an active agenda in charitable organizations and continues the company’s philanthropic views focusing on the Waunakee community and Madison area. Today, Paul is personally involved with each customer to ensure projects are completed to the customer’s expectations. The entire Simon Builders team maintains the same tradition of adaptability and diversity as they create structures that have style, beauty, quality, and value.

Committed to building energy-efficient homes, the company takes extra steps to meet the highest energy standards and to use materials that are healthier for homeowners and the environment.

Michael F. Simon reached 125 years in business in 2018. To celebrate this momentous occasion, we celebrated all year long by giving back to the community that helped us reach this milestone.